You can follow the live video commentary here. Meanwhile you can get to know more about the team.

Susan Polgar, a Hungarian-American grandmaster, became the #1 ranked player of the world at 15. In 1991, she became the 1st woman to earn the Grandmaster title. During her illustrious career, she won a total of 10 Olympiad medals (5 gold, 4 silver, 1 bronze) and 4 World Championships. She is the only world champion, male or female, to win the triple-crown (world blitz, rapid, and classical championships). Today, she is the coach of the national collegiate champion and #1 ranked Webster University Chess Team in St. Louis. She is also the founder of one of the most popular chess blogs in the world www.ChessDailyNews.com. You can find her on twitter @SusanPolgar.

Tania Sachdev, born in 1986 is a Woman Grand Master and an International Master. She is a member of the national women team. The Delhi girl has won multiple national championships and international medals and is an Olympiad medalist. She is a former Asian junior champion and a former Asian women champion. Tania Sachdev is involved with many social activities and NGO’s and has worked with HIV+ children in her country. She loves to travel and is convinced if it wasn’t for chess she would have been a dancer. She is also the recipient of the Arjuna award, which is the second highest sporting award given by the president of India.

Born in 1986, Lawrence Trent is an International Master and despite having a number of international tournament victories under his belt, winning the Porto San Giorgio International back to back in 2005 and 2006, is perhaps best known for his role as anchor and commentator at annual super tournaments such as the London Chess Classic, the Grenke Chess Classic and most recently the World Championship Candidates, together with former World Championship Finalist GM Nigel Short. The Londoner, who has a degree in Romance languages and European Studies from Lancaster University, has also produced a number of best-selling training DVDs for Chessbase, including “The Smith-Morra Gambit” and “Two Knights Defence”, and is one third of the popular “Full English Breakfast” podcast, produced in association with Macauley Peterson and GM Stephen Gordon. Outside of chess, Lawrence is a massive Chelsea FC fan and enjoys travelling around Europe rocking to the latest mambo rhythms.”

Grand Master R.B.Ramesh is from Chennai, India. 37-years old and married to Woman Grand Master Aarthie Ramaswamy. He was British Champion in 2002 and Commonwealth Champion 2007. He retired from active participation in Chess competitions from 2008 and started a Chess School “Chess Gurukul” at Chennai for the past 5 years. Was the coach for the Indian Senior, Junior and Sub-Junior teams since 1998 in various International Competitions. He trained many medal winners in the World Youth Competitions over the years. 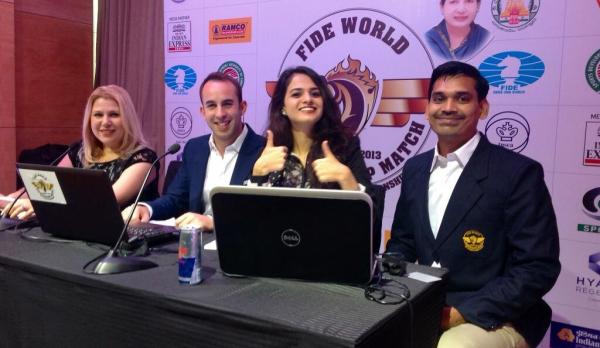