World No.1 and challenger Magnus Carlsen of Norway moved closer to the crown when he won game nine with the black pieces in 28 moves to take an unbeatable 6-3 lead in the 12-match series at Hyatt Regency Hotel in Chennai on November 21.

Carlsen needs a single draw from the three remaining games to win his maiden world chess title. If he does it he will become the 20th player and first Norwegian in the history of world chess to win the title.

Anand needs three wins from the three remaining games to force a tie-break. “The situation does not look so good,” confessed Anand. Anand had been world champion in 2000 to 2001, then from 2007.

Carlsen is well placed and experts expect him to win the title on Friday. Carlsen won three games and six were drawn. Carlsen leads by 6-3 and Anand is yet to win a game. He could still win one black game on Friday and delay the Norwegian celebrations.

“The position was extremely imbalanced. Fear of being mated was there,” said Carlsen speaking after the game in a crowded press conference. Carlsen had spent the free day yesterday at the beach resort playing basketball and swimming. 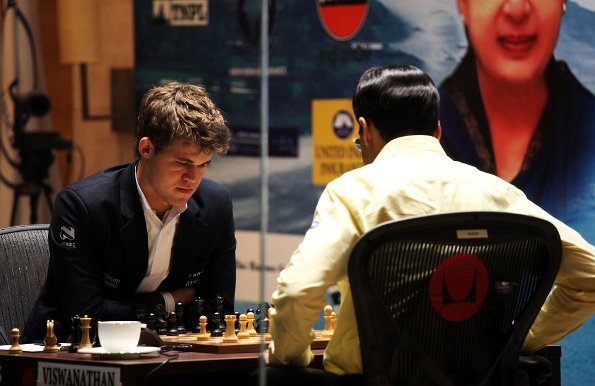 Anand and his team had prepared for this in the free day yesterday. The position was promising. After 27.Rf4 black promoted the pawn. Anand’s final blunder on move 28 ended the game as he was losing a rook.

The players arrived to applause from the audience. When Anand moved 1.d4 which was expected, once again the audience applauded. Anand had moved clearly from 1.e4 to 1.d4. Carlsen had played the Caro-Kann in game one and then played the Berlin variation of the Ruy Lopez in the other games with solid play.

Unable to break black’s defences, Anand was expected to move to 1.d4 in the previous white game. Having had to calm himself with a draw after defeats in game five and six, Anand decided to do so with 1.e4 and keep the 1.d4 more like a surprise in this game.

Anand played 10.g4 and went for aggression from the word go. Being in a must win situation did not help him much.For his 23rd move, Anand took over half an hour. On the 28th move, Anand had a draw but blundered with Nf1. 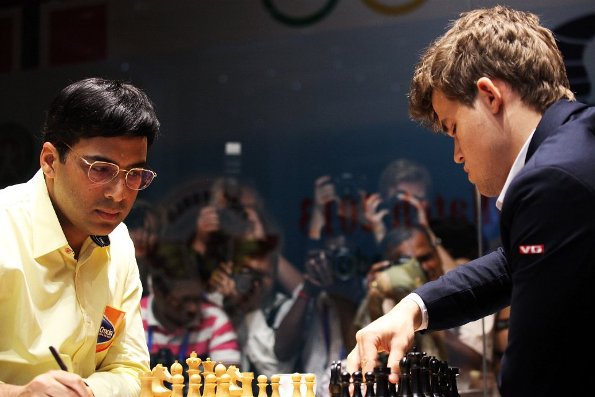 “There was not much of choice,” said Anand after having to play an aggressive line today. “I needed to change the course of the match drastically,” said Anand.