She was educated at the Bishop Garden Girls’ High School in Bangalore and later at the Presentation Convent Church Park in Madras. On completion of Matriculation in 1964, she won a scholarship from the Government of India for higher studies but did not accept it as she took up a career in films in Tamil, Telugu, Kannada, Hindi, English and Malayalam. She was trained in classical dance (Bharatha Natyam) and carnatic music from the age of 4 onwards. She is proficient in other dance-forms such as Mohini Attam, Kathak, Manipuri. She has given hundreds of performances in Bharatha Natyam all over India and has sung several songs herself in her films. She is proficient in English, Tamil, Telugu, Kannada, Hindi and can understand Malayalam very well. 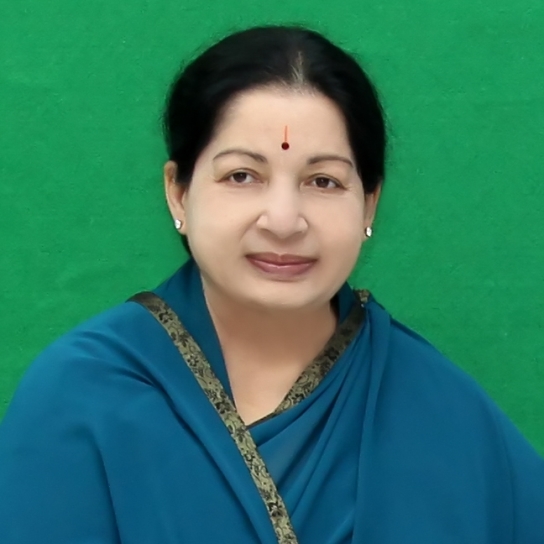 Written several articles in English and Tamil which have been published in various periodicals. Written four full length novels and several short stories in Tamil.

AIADMK general secretary J Jayalalitha, whose resounding success in the Tamil Nadu assembly polls came on Mothers’ day on Sunday, said.
“People of Tamil Nadu consider me their mother so I think it is a fitting victory,” she told reporters at her residence. “Only a mother knows what a child wants,” she said adding “I will prove to be a good mother.”

She is popularly called as Amma and Puratchi Thalaivi.

An interesting fact about her is that she has a large private library with a huge collection of books. Her close friends call her by the name Ammu.

When she was Chief Minister earlier in 1995, she built six stadiums for the conduct of South Asian Federation Games. These six magnificent edifies stand testimony to her love for sports.