World No.1 ranked Magnus Carlsen of Norway was formally crowned the World Chess Champion at a glittering, brief awarding ceremony in Chennai.

He was presented a dazzling gold trophy, cheque and the crown by the FIDE President Kirsan Ilyumzhinov and the Tamil Nadu Chief Minister Ms J Jayalalithaa at the Ballroom of the Hyatt Regency Hotel in the heart of Chennai.

The Chief Miniter of Tamil Nadu, Ms J Jayalalithaa presented symbolic cheques for Rs.9.90 Crores to Magnus Carlsen and Rs.6.03 Crores to Viswanathan Anand at the prize giving ceremony of the FIDE World Chess Championship that came to a close today.

She handed over the crown made from olive leaves in the Nilgris mountains in Tamil Nadu to the FIDE President who did the crowning. 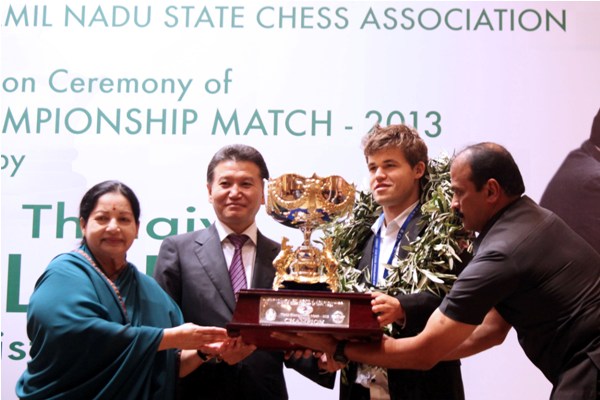 The closing ceremony had no speeches, only background announcements in Tamil and English. After the traditional ‘Tamil Thaivazlthu’ was played, the FIDE anthem followed by the awarding of silver medals for Viswanathan Anand by the FIDE President.

Former world champion Viswanathan Anand who had checked out of the Presidential Suite on Saturday morning came directly from his home and left after the ceremony. The ceremony lasted 15 minutes and started a few minutes ahead of the scheduled time.

Anand was dressed formally in tie and jacket and Carlsen had his jacket on. The venue was the same hall in which the ten games were played.

Over 500 people attended the crowded ceremony which also witnessed huge security personnel both inside and outside the hotel. 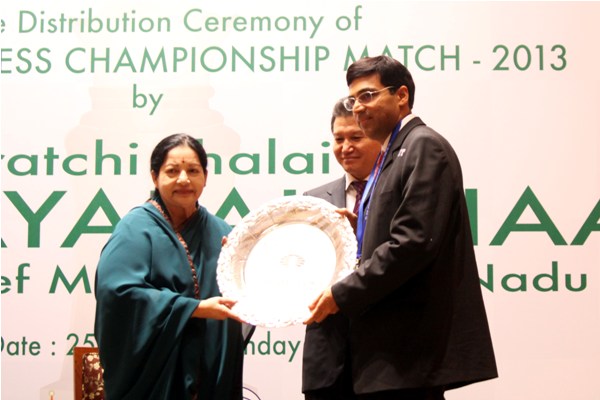 This event, which saw a western player win the world chess title for the first time since 1972 gained the maximum publicity for chess, both in terms of television and internet viewership.

Carlsen became the 20th player ever in the history of world chess since 1886 to be crowned champion. Norwegian presence was large and many were singing the Norwegian anthem at the top of their voices.

The ‘Ultimate’ world chess championship that ran from November 7-25 at Chennai was organised in a spectacular manner by the Tamil Nadu State Chess Association. 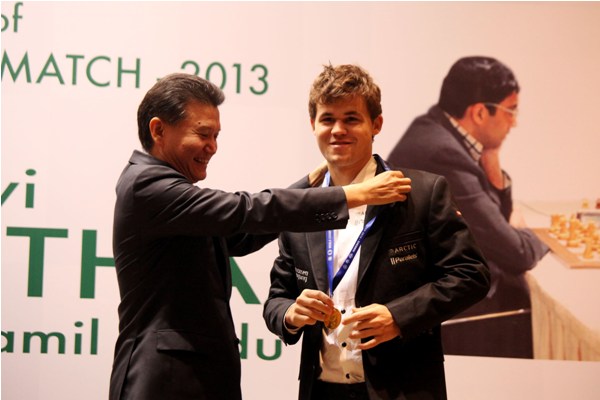 The Tamil Nadu Chief Minister Ms J Jayalalithaa sponsored a massive sum of Rs.29 Crores and making for this event in India possible.

The All India Chess Federation President J.C.D. Prabhakar and FIDE Vice President D.V. Sundar made sure this event was brought here and organised smoothly.

All the game and free day reports, transcripts from game three till the end were prepared by Arvind Aaron, AICF Press Officer.
The photos were taken by Mahesh, who contributes to Tamil Nadu State Chess Association at all ceremonies and functions.
Transcripts to the first few games were done by R.R. Vasudevan.
All photos attached to this file are taken by Anastasia Karlovich, FIDE Press Officer
Official website was hosted by FIDE and maintained by Chessdom.com 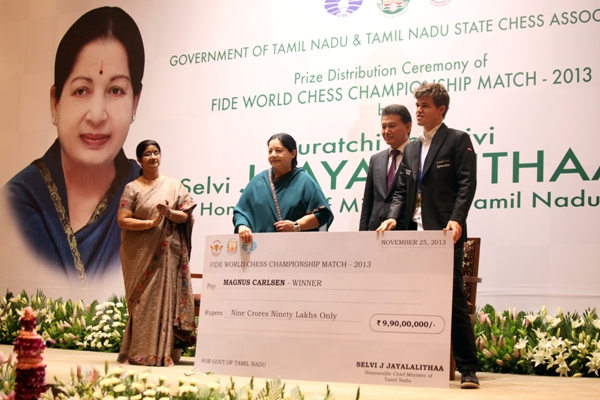 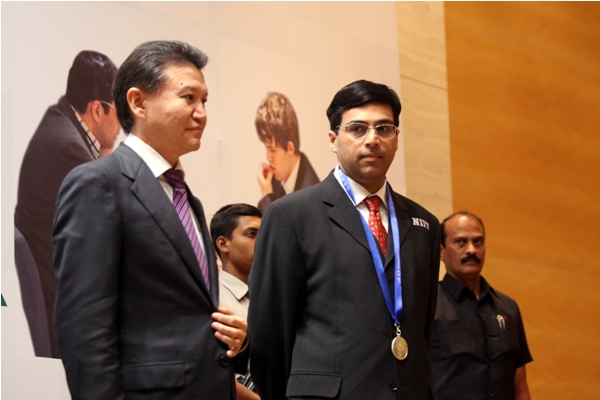