Four years in the making, a unique documentary on young blind chess players from India made by British filmmaker Ian McDonald and an Indian team to screen at the World Chess Championship in Chennai.

The award-winning documentary Algorithms, directed by sports sociologist and documentarian Ian McDonald will be screened at the FIDE World Chess Championship 2013.

This one-off special screening presented by FIDE, AICF and TNSCA will be held at 4 pm on 21 Nov, 2013 at the Abbotsbury Ballroom (next to Media Centre), Hotel Hyatt Regency, the venue of the championship. Director Ian McDonald and Geetha J, the producer of the film will be present for the screening.

Algorithms (2012 / 96mins) is a feature documentary on young blind chess players from India. Filmed over three years from just before the World Junior Blind Chess Championship in Sweden in 2009 to just after the next championship in Greece in 2011, it follows three talented boys from different parts of India and a totally blind player turned pioneer who not only aims to situate India on a global stage but also wants all blind children to play chess.

The film, which has received critical acclaim and picked up awards at film festivals all over the world, is Ian’s first feature documentary and the first ever feature documentary on blind chess. Ian, who recently joined Newcastle University, UK, as a Lecturer in Film Practice, commented:

“The response to Algorithms has been amazing wherever it has screened. Audiences have been really taken with the subject matter, but most of all, it is the compelling characters in the film that seem to have captivated people. I am really looking forward to seeing what the audience in this chess championship make of the extraordinary young blind chess players of India!”

Screening is free to all but donations are welcome as all proceeds will go towards creating a high spec “Audio Narration” to make the film accessible to the blind and visually impaired community. 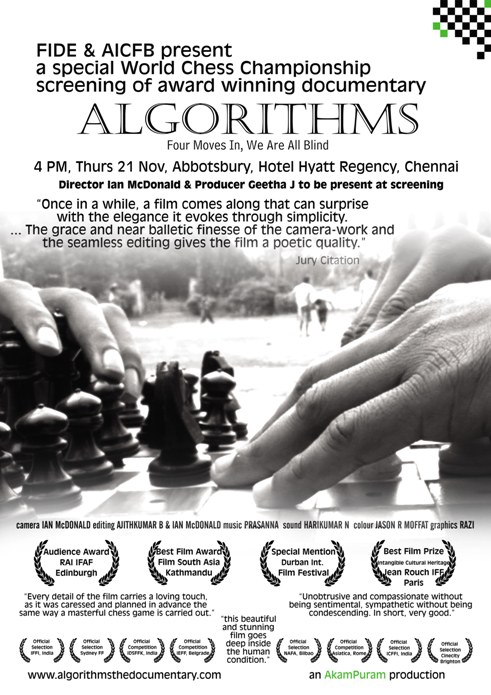 In India, a group of boys dream of becoming Chess Masters, driven by a man with a vision. But this is no ordinary chess and these are no ordinary players. Algorithms is a documentary on the thriving but little known world of Blind Chess in India.

Filmed over three years from just before the World Junior Blind Chess Championship in Sweden in 2009 to just after the next championship in Greece in 2011, it follows three talented boys from different parts of India and a totally blind player turned pioneer who not only aims to situate India on a global stage but also wants all blind children to play chess.

Algorithms travels with the chess players to competitive tournaments and visits them in their home milieu where they reveal their struggles, anxieties and hopes. It moves through the algorithms of the blind chess world reminding the sighted of what it means to see. Going beyond sight and story, this observational sport doc with a difference elicits hidden realms of subjectivity. It allows for the tactile and thoughtful journey that explores foresight, sight and vision to continue long after the moving image ends.

Algorithms is the first ever feature documentary on Blind Chess.

The citation for the Ram Bahadur Tamang Trophy for Best Film that Algorithms received at Film South Asia:
Once in a while, a film comes along that can surprise with the elegance it evokes through simplicity. For telling a simple, moving story that delivers us, right from the outset, into the thick of the extraordinary universe of a handful of blind boys dreaming of becoming International Grand Masters in chess; for its fluid narration of the practical barriers they need to overcome and the enabling human bonds that mitigate their disability; for taking us close to a demonstration that fingers can ‘see’; for its dispassionate humour in noting the tensions of the sighted as against the restraint of the sightless players; and for magically and incrementally evoking deep emotions out of singularly non-narrative material rendered in the fluent abstraction of B&W, the Jury picked Algorithms, from India, by Ian McDonald. The Jury also felt compelled to remark on the grace and near balletic finesse of the camera-work that, throughout, hardly seemed intrusive and the seamless editing that gave the film a poetic quality.

• Won the Audience Prize at the RAI International Festival of Ethnographic Films, Edinburgh, UK in June 2013.

About the Director:
Dr Ian McDonald is a documentary filmmaker and sociologist based at Newcastle University in the UK. His seemingly effortless ‘way of seeing’ has resulted in beautifully shot and carefully observed documentaries with a difference. Previous films include Inside the Kalari on martial art kalarippayattu, Brighton Bandits on a gay football team, Melancholic Constellations on the art of William Kentridge and Justin on a forgotten man and a campaign in his name.

About the Producer:
Dr Geetha J began her career as a journalist, critic and media professional based in India. Keen on yoking theory and practice, Geetha turned to filmmaking with her first film Woman With A Video Camera from Kerala. She received the Goteborg International Film Festival’s Development Fund for her first feature script that is now complete. Her experience as a producer includes several documentaries in the UK and India.